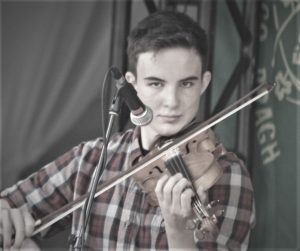 Although I am back at Humber for my second year of music, I am available for your next event. Connect with me if you are requiring a violinist, traditional fiddler, or a musical group to entertain. 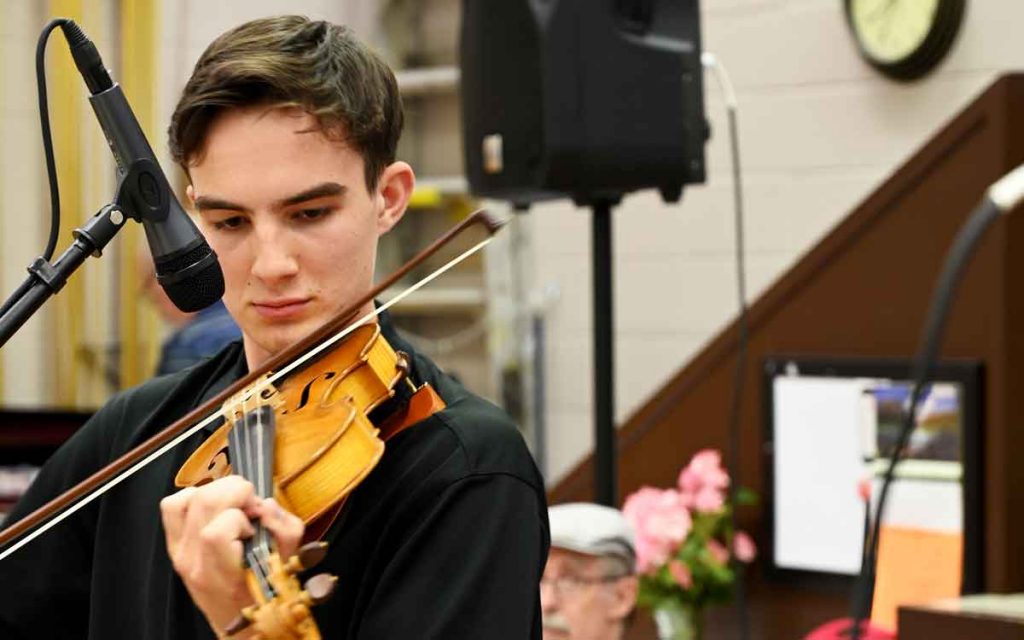 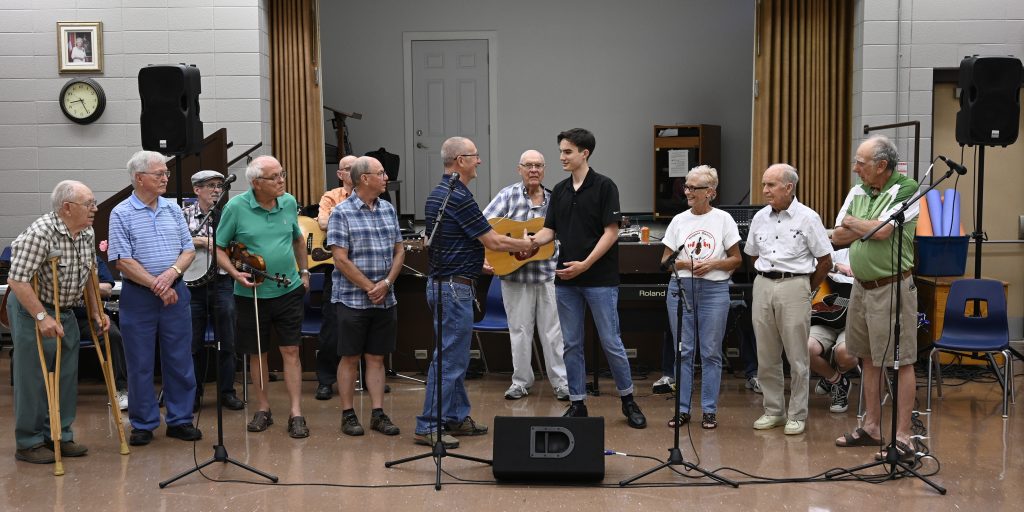 It was a great surprise and tremendous honour for me to be recognized last night by my old Niagara fiddle club. The Niagara Old Tyme Fiddlers Association awarded me a scholarship in memory of our friend Elvera Ciazynski for my commitment to and pursuit of traditional fiddle music.

Here is local media on the recognition. From the St Catharines Standard “The art of the fiddle” and from Niagara This Week “Niagara Old Tyme Fiddlers Association encouraging new players“.

I have always enjoyed playing at the club and I remember those first times on stage when I was just 8 years old. Club members have always been encouraging and I am fortunate to have them as my friends.

Here I am playing with two good friends — Mike Mattie and Wally Knash. 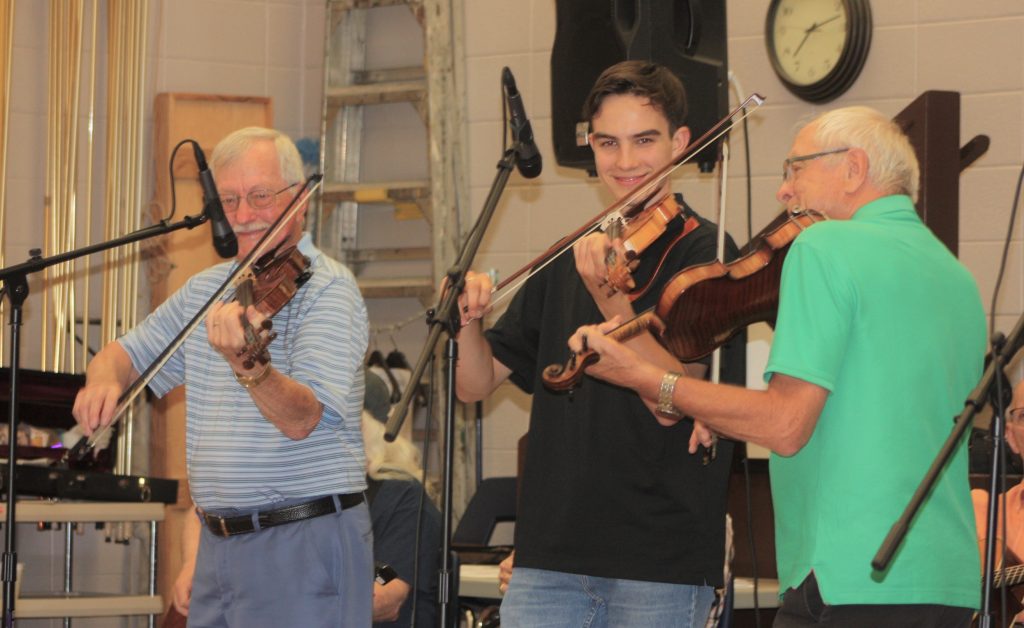 Many thanks to Beth Bartley — club member and my first fiddle teacher — and to all those club members who made this scholarship possible. 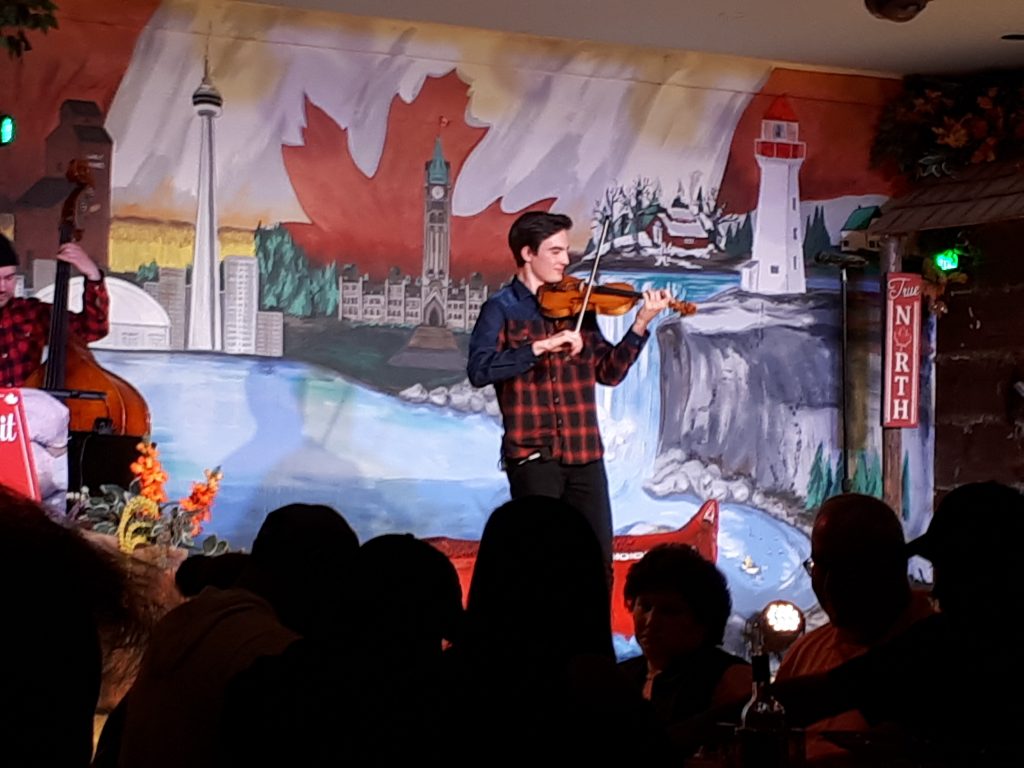 For a music student, I have the perfect summertime gig at the Oh Canada Eh dinner show in Niagara Falls. I have had a lot of fun playing in this high-energy show, and have enjoyed learning about performing in a musical theatre-like setting.

It has been a real pleasure working with high caliber entertainers – actors and musicians, both instrumentalists and vocalists alike, who are responsible for putting on such a great show. 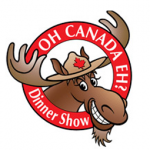 Come out this summer and laugh through an evening of entertainment! I would look forward to seeing you, eh!

You can order your tickets here: Oh Canada Eh! 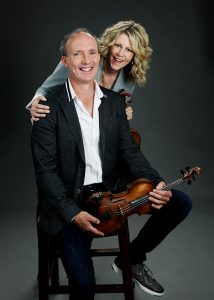 I have been very fortunate to yet again be invited to play in an auxiliary string section with Natalie MacMaster, Donnell Leahy, and their band.

This latest performance was at the theatre in Casino Rama in front of an audience of 4000 people. I performed in a few numbers, playing string pads under Donnell Leahy and a few tunes in a jam-like setting.

While I have performed many gigs in my life, it is incredible to see the work and effort put into a show of that caliber. I am extremely blessed to have opportunities like this, and it is incredibly humbling to be in the presence of such great talent and musicianship.

Many thanks for the opportunity

I have been fortunate in my first year at Humber to not only learn a lot from my professors, but also to make great music with my friends. I had a blast at the many impromptu jam sessions – some lasting well past midnight. Most of the great music created with my friends was not captured on video. Thankfully, my good friend Harrison produces terrific YouTube videos. He took it upon himself to orchestrate projects, some of which I played a part in. You can check out some of his great work here: Harrison King Music.

I am accompanist in the rendition of Shallow from A Star is Born.

I am really looking forward to this week!

On Tuesday night I will be performing with musicians from Humber College as the Humber music program is featured at the National Musicfest Finals. This year the national music showcase and contest is being hosted in Ottawa. The Humber Experience is taking place at the Bronson Centre and the performances begin at 8 p.m. I am performing with the Humber Strings under the direction of Drew Jurecka.  More information on this event is here. 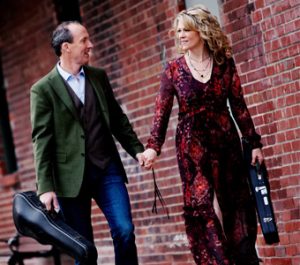 On Saturday afternoon I am performing in the Natalie MacMaster and Donnell Leahy show at Casino Rama.  What a thrill this will be to again be included in a show with these exceptional fiddlers. Show time is 1 p.m. at the casino and you can buy your tickets here.

So, this week it is going to be travelling from Ottawa to Orillia – with a special 25th anniversary Oh Canada Eh! show on Friday in Niagara Falls. Great opportunities – great fun. 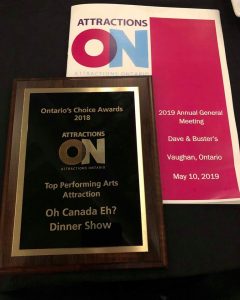 I am thrilled to be part of a dinner show that has been running for more than two decades! This week Oh Canada Eh Dinner Show appeared at the Attractions Ontario Awards Ceremony to accept its 2018 Top Performing Arts attraction. Congratulations! This recognition is a wonderful tribute to the actors and musicians who have made this show so much fun and entertaining night after night. 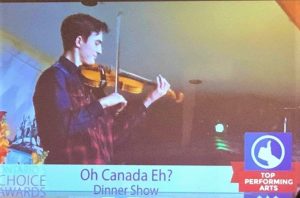 It was surprising to see that when the show producers were accepting the award, I was used in the show’s promotional piece.

I hope you can join this year’s cast to enjoy the show’s 25th anniversary. Come see the show through October 26th as we celebrate “All Things Canadian.” For the new 25th Anniversary production, the show features 30 minutes of new material. There are new costumes, a new set — and some new faces for a wonderful night out.

Here the link to the Oh Canada Eh website where you can order your tickets: 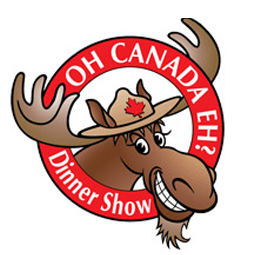 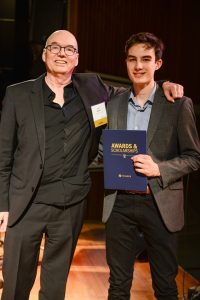 It was an honour to be the recipient of the Scott Henshaw Memorial Award, given to me by the Humber Faculty of Music for both my academic standing and music performance. It was especially gratifying to be recognized for my improvisation, which is something I have only picked up entering my music program this year. I have worked hard at this element of my music and the recognition means a lot to me. What a great year!
I was pleased to receive the award by none other than Ted Quinlan.
Thank you to Seraphic Entertainment Ltd for establishing and sponsoring this award. Thank you to Drew Jurecka and the Bachelor of Music program for such a wonderful experience in my first year at Humber. And thank you to the Humber Faculty for selecting me as the recipient for this honour. 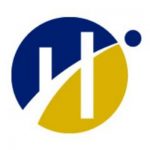 I am looking forward to this show that pays tribute to Danny O’Connell. It will be great to see old friends while at home for this performance. 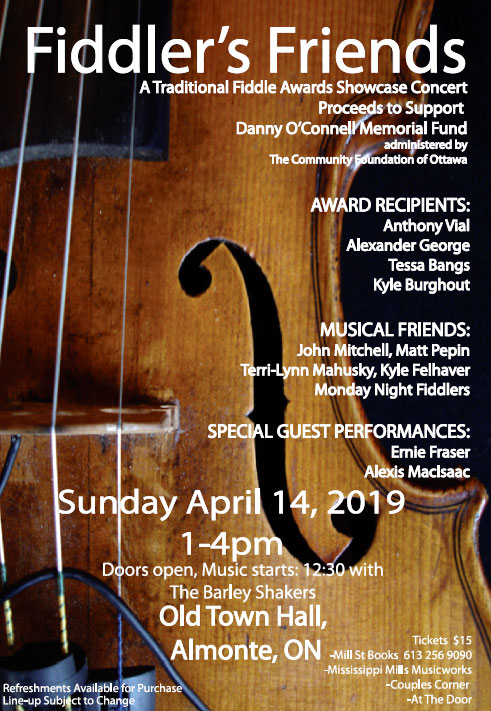