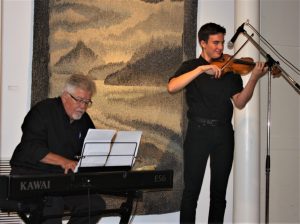 Alex is a musician who plays violin (the fiddle!) and mandolin. He is currently studying violin in the Bachelor of Music in Jazz Performance program at Humber College in Toronto.

In his first year at Humber, Alex was the honoured recipient of the Scott Henshaw Memorial Award for his high academic standing and musical performance, with recognition for his improvisation skills. (See Alex’s blog post on this honour.)

Through the summer of 2019, Alex was the house in fiddle in the cast of Oh Canada Eh! Dinner Show in Niagara Falls. (See more info on Alex’s latest blog post.)

In 2019, Alex was the recipient of the Niagara Old Tyme Fiddlers Association scholarship presented in memory of Elvera Ciazynski, for Alex’s commitment to and pursuit of traditional fiddle music.

In 2017, Alex was the recipient of the Danny O’Connell Memorial Award, recognized for his role in advancing the Ottawa Valley fiddle tradition.

Alex has been honoured to be part of Natalie MacMaster and Donnell Leahy performances last year. In May 2019, he was with Natalie and Donnell at Casino Rama (see Alex’s blog post). In December 2018, he was in their television special a Celtic Family Christmas and he also performed in their Christmas show on the National Arts Centre stage.

He has enjoyed performing on stages in Ottawa and throughout the Valley, including on Parliament Hill, CBC Radio and 98.7 Valley Heritage Radio, Celtfest festivals, and the infamous Valley Stage at Renfrew Fall Fair.

Although he has moved to Toronto for school, he remains a proud member of the Ottawa Traditional Fiddling and Folk Art Society.