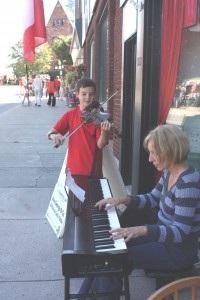 The puppet festival was a blast and was even better than I thought it would be. Mom and I had a great time performing on Mill Street through the weekend. I met a lot of great people who had nice things to say about the performance. The crowd favourites were: Tennessee Waltz, St. Anne’s Reel, Two Step D’armand, and Maple Sugar.

I was excited to hear that Ottawa Radio Station CFRA reported live from the festival and described me as a “musical wizard”! (Not to brag, but it was great to know that they liked my music so much.)